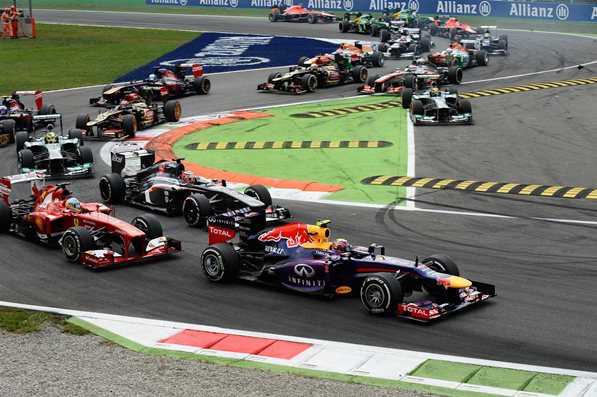 Formula One, which is also referred to as Formula 1 or F1, and officially known as the Formula One World Championship is the most popular single-seater, auto-racing series in the world, with open-wheel cars characterized by cutting-edge technologies with no expense spared.

The race is sanctioned by the FIA, also known as the Federation Internationale de l’Automobile. The FI Grand Prix season usually starts in March, and comprises a series of races held around the world on both public roads and purpose-built circuits.

This sport originated in Europe, where about half of the races are held, with the other half of the Grand Prix being held in different continents. Owing to the international nature of the sport, F1 can be streamed live in nearly every country or territory in the world. Formula one attracts a global TV audience of close to 600 million people per season.

TV stations usually receive their broadcast from the “World Feed”, which is produced by either the Formula One Management (FOM) or the “host broadcaster”. Most of the major TV companies, like BBC and SKY cover the sport, which has created an extensive web following, and allowed fans to watch formula 1 online. The following are some options for you to access the Formula 1 live stream online:

F1 Streaming through Networks that offer TV and Online Broadcasts

Considering that the F1 races happen all over the world, it is unlikely that a single TV network will be able to air all events for the entire season. Fortunately, you can access the streams from different networks around the world for F1 streaming online. Some of the TV networks that cover most of the races include BBC in the UK, SRF in Switzerland, Atres in Spain, RTL in Germany, Orf in Austria, and Ten in Australia.

These networks offer online TV streaming services, though the viewing is usually restricted to only the residents of the country where the network is broadcasting. This means that the BBC live stream can only be accessed from the UK, and Ten only from Australia. So, is there a way to access the live feed if you are not in the respective country? Yes.

There is actually a clever and easy way for you to access F1 live streaming, by appearing like you are in any of those countries using a Virtual Private Network (VPN). If you are not familiar with VPNs, they are services that allow you to mask or hide your location, mostly for privacy reasons to prevent third parties from spying on your online activities.

So, if you are in the US, you can connect to a VPN server that will give you a UK IP address, to make you appear as if you are browsing from the UK. This way, your VPN connection allows you to access F1 live streaming online on the BBC website without issues, since it sees that you are within the UK.

While this is a simple process, there is one catch: you need a reliable service that is fast enough for you to stream video, which will cost you some money. Typically, providers charge about $10 per month, but you can pay much less for a longer subscription, like quarterly or semi-annually. There are many good VPN providers, but you should make sure that they offer fast browsing and video streaming capabilities. Once you are subscribed to a VPN, you are free to switch between different broadcasts in different countries, like the UK and Australia for English channels. Other countries’ channels are broadcast in their local languages.

F1 streaming on the go

The options mentioned above are great for streaming on your PC, but you can also watch more conveniently on your mobile device. There are iOS and Android apps that allow you to stream Formula one on your tablet or smartphone, though some impose regional restrictions that keep you from accessing all the features. Common apps for watching Formula 1 online include:

You will get all the information you need about the race, including races, teams and drivers, tickets, results, photos, and news, from the official F1 website. The app offers similar information on the go, including lap times, leaderboard, session commentary, sector classification, and news stories, throughout the season. In addition, you get official live timing of all Formula 1 sessions, team radio transmissions, driver trackers, in-corner analysis comparing the entry, apex, and exit speeds of each driver, text and audio commentary, and live tire information. These features are also available on PC by going to the official site.

NBC sports Live Extra is possibly the best place for F1 fans in the US to follow most of the races if you have a subscription to participating cable providers. There is also an app for NBC Sports Live Extra, for Android and iOS mobile devices from where you can watch live sporting events for free, provided they air on NBC or NBCSN.

TSN Go is a great option for F1 fans in Canada to watch TSN and TSN2 on a variety of platforms, provided you are subscribed to the TV channels via a compatible service. Fans without a subscription can still keep up with the race from the paddock, though access to live TV and commentary from renowned BBC team of David Coulthard and Ben Edwards is only available if you have a subscription.

BBC has rights to cover the F1, which means that fans with the app can get live action, highlights, and other news on their smartphones or tablets. With the app, you can stream live Formula One, watch highlights, follow scores, set notifications, and even read sports articles. The official BBC sports app is a great all-round sports news app that will keep you updated on all events in the world of sports, including the F1.

There are a variety of places where you can find live Formula 1 streaming for free without any hustle, like: